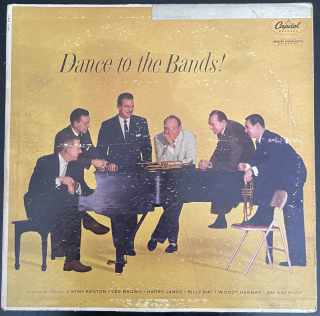 Back in October of 1998, Sony Music and Universal Music released a CD called Now That's What I Call Music!, a collection of current pop hits. The format was already successful in England, so it was no surprise when millions of units sold, nor when subsequent volumes were released every few months or so. (Volume 83, believe it or not, dropped last August.)

Music lovers of my generation will remember a company called K-Tel records doing much the same thing in the 1970s and '80s, though on a much smaller scale. In fact, one of my saddest childhood memories involves a K-Tel record, Wings of Sound, a collection released in 1980 featuring hits from Michael Jackson, Kool & the Gang, and Blondie, among others. It was one of the first records I ever bought, and I played it all the time. But because I was only eleven years old, I left it on the turntable after listening to it one day, not realizing that it mattered that the record player would be bathed in sunlight all afternoon. When I went back to listen to it the next day, the vinyl had warped and buckled. I can still see the hills and valleys in my mind's eye, and I can feel my eleven-year-old heart breaking all over again. It was a sad day.

This wasn't the first time record companies released compilations like these. There are any number of them in my father's collection, and this collection of big band tracks is the first one I've come across. The blurb on the back of the album jacket explains it better than I ever could, so I'll include the whole thing here...

Americans are flocking to the dance floors. 39 million of them at last count, according to a national magazine. And of all the places where people dance, one is a sure winner for the least crowding and most informality. That, of course, is home itself, whether it's a penthouse apartment, college dormitory, or suburban living room where dancing's done.

Capitol makes a whopping contribution to the trend toward do-it-yourself dance parties with this album that is trend-setting in its own right. For here in a two-record package is enough music to brighten an entire at-home dance. What's more, the music is wonderful enough to keep couples dancing all evening. The bands play in top form and their program is ideally balanced. Altogether, it's an irresistible Invitation to the Dance, styled for today!

It's impossible to read that without imagining such a gathering -- maybe a neighborhood dinner party that finishes with drinks and dancing, or a group of pretentious college students pretending to be grown as they couple up and dance the night away on campus. Nothing could be more 1950s.

The record features six different band leaders and their orchestras, but only two of them are familiar to me -- Les Brown (and his Band of Renown) and Woody Herman. I'll have to trust the producers that Stan Kenton, Harry James, Billy May, and Ray Anthony also belong.

Double albums were always fun. I remember being eager to open them up and see what waited inside the fold. This jacket features pictures and short bios of the six band leaders, as well as track info, but the most interesting thing about the physical album are the records themselves. When I first pulled the vinyl out of the protective sleeves, I noticed something odd. One record was labelled with sides 1 and 4, the other with sides 2 and 3. I assumed there'd been a printing error until I remembered something about my father's turntable, the one that I grew up with.

We're used to seeing a small metal rod protruding from the center of the turntable that fits the hole in a record. On my father's turntable, however, there was a stem that extended three or four inches, and it was designed to hold a stack of records while one was playing. Once the first was finished, the tonearm would automatically lift from the record and swing back out of the way, then the next record would drop to be played. In this way, an automatic record player -- an ancestor of the 5-disc CD changer I once had -- would allow a host to listen to several album sides in a row without having to fiddle with the records. (If that doesn't make sense, here's a short video clip.)

And so if you wanted to play Dance to the Bands! at your evening soiree, the odd 1-4 and 2-3 orientation of the sides would allow you to use your automatic record player to play sides 1 and 2 consecutively before flipping them both over for sides 3 and 4. Genius. 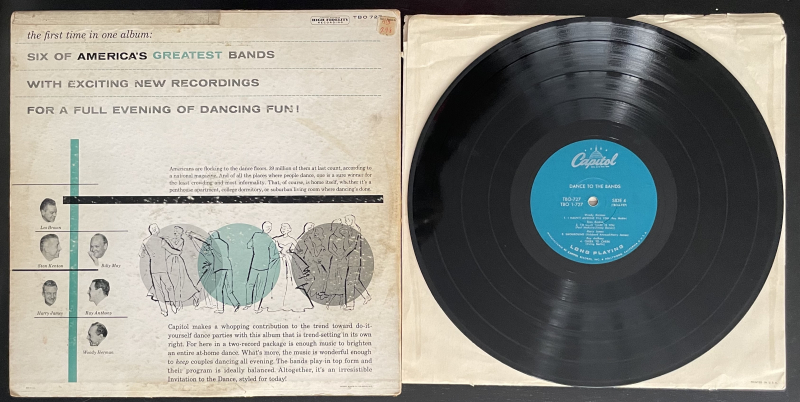