20. The Canadian Scene via Phil Nimmons 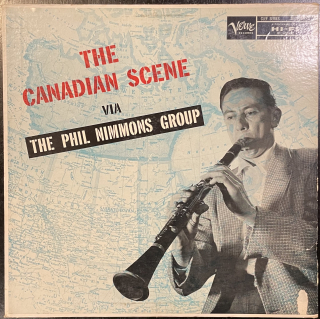 If you'd told me back when I started this vinyl adventure that I'd one day be listening to a jazz clarinetist from Canada, I'd never have believed it, but at this point it makes perfect sense. Jazz is probably the first true American art form, and I can only think of three others off the top of my head -- rock and roll, hip-hop, and baseball. Like those later three, jazz has never been constrained by national borders.

It should be no surprise, then, that there was such a thing as a "Canadian scene," and as I learned from Woody Herman, there's no reason that a clarinetist shouldn't be fronting a group like this. Even though I've come to understand this on an intellectual level, it's still hard to square what I'm listening to right now -- an absolutely blistering solo by Nimmons on "Rhumba Pseudo," the finger-snapping track that closes side one -- with the musical struggles of Squidward Tentacles or the incessant squeaking of a beginning sixth grader. It's a much maligned instrument, and that's a shame. In the hands of an expert like Nimmons, it's more than just a licorice stick; it's a magic wand.

After the high energy of the first side, Nimmons and his group return to the classics on side two with a series of standards that even a casual listener would recognize. There is no definitive list of jazz standards, but to paraphrase a Supreme Court justice who was talking about something entirely different, you know one when you hear it. These were classic tunes that any jazz musician would know and be able to play, a requirement due to the fluid nature of jazz performance, where musicians would often jump from one band to another from night to night, filling vacancies and picking up jobs where they could. If the group in front of him hadn't been rehearsing together consistently -- or perhaps didn't even know each other's names -- the band leader could still confidently call out for Gershwin's "Someone to Watch Over Me" or Benny Goodman's "Stompin' at the Savoy" and know for certain that any musician worth his salt would be able to jump right in. (The standards could also serve as measuring sticks by which one musician could be compared to another.)

The standards weren't strictly jazz numbers, but they were always recognizable songs that an audience would know. Broadway tunes would often find a second life bouncing around the jazz clubs where their familiar hooks would tug at the ears of listeners while providing jumping off places for the musicians to explore musical tangents. Perhaps the best example of this is John Coltrane's My Favorite Things, a collection of songs by Cole Porter, George and Ira Gershwin, and the title track, which is from Rodgers and Hammerstein's Sound of Music. You can imagine Julie Andrews for a few bars here and there, but then she disappears into a sea of the most beautiful jazz improvisation you'll ever hear.

The Nimmons Group's treatment of the standards on side two is similar, but there's something more than jazz -- or maybe quintessentially jazz -- happening on the third track. In no other musical genre could you find a Canadian clarinetist leading his band through an interpretation of a song written by another clarinetist to honor a Harlem nightclub. It makes no sense at all. Except it does. 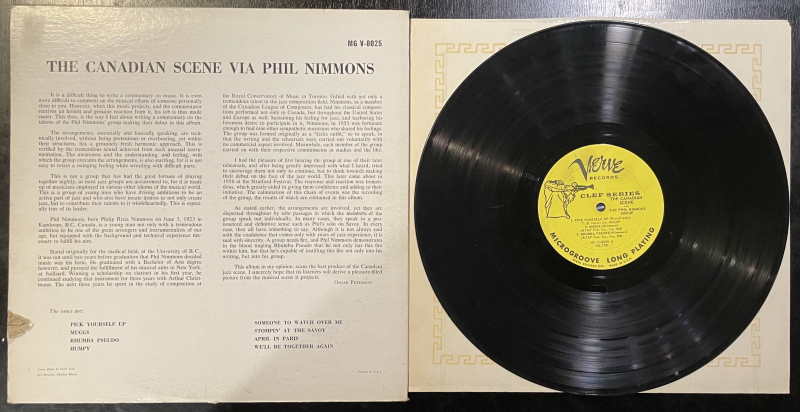 Side 1
Pick Yourself Up
Muggs
Rhumba Pseudo