For the second time I find myself writing here about a Duke Ellington performance at the Newport Jazz Festival. The first time was Newport 1958, but this record was from two summers earlier, in 1956, a recording that many still see as one of the most important in Ellington's career.

Ellington's performing career spanned from the 1920s until his death in 1974 and included dozens and dozens (hundreds?) of recordings. He is, without question, not only one of the most important and most influential jazz musicians of all time, but one of the greatest American musicians of any genre. Given that, it should be no surprise that his work is well represented in my father's collection.

One way in which jazz differs from more modern genres of music is in the importance of performance. It isn't uncommon today for the most popular artists and bands to eschew touring altogether in the later stages of their careers even as they continue to produce new music in studio sessions. Some bands may develop reputations as being outstanding showmen, but even in those cases the studio work takes precedence.

For many jazz performers, however, this wasn't the case. As the 1956 Newport Jazz Festival approached, Duke Ellington's career appeared to have been waning. It was his performance on July 7 -- not a stunning new studio album -- that revitalized his career and gave him the momentum to continue for another two decades. This record is ostensibly the documentation of that evening (which stretched into morning), and it eventually became the best selling album of Ellington's career.

Why was performance so important? Jazz is an ephemeral art form, due in part to the improvisational nature of the genre but also to the limitations of vinyl records. With only about twenty-two minutes available on one side, there often wasn't room for longer studio compositions or live performances that stretched beyond those limits. (As a result, the CD era saw an explosion of releases of older material that couldn't have been released in previous formats.)

As alluded to above, this recording isn't completely live as suggested. Columbia Records did indeed record Ellington and his band that evening, but there were problems. Saxophonist Paul Gonsalves apparently played into the wrong microphone for long stretches and was completely inaudible, for example, and some of the crowd noise we hear on the record is artificial.

But when you're discussing a landmark record like this there's no point in quibbling over details of perceived authenticity. George Avakian's rich liner notes ignore all of this and instead focus on the impact of the live performance. His description upends any image the reader might have of a jazz concert, more specifically a jazz audience, in 1956.

The most important moment is preserved on side two during the fifteen-minute masterpiece "Diminuendo and Crescendo in Blue," which featured a lengthy tenor sax solo by Gonsalves. Ellington had told him to blow as long as he felt like blowing, and the result was a near ten-minute solo that brought the house down. We imagine row upon row of dignified listeners, perhaps tapping their toes but nothing more. But reading Avakian's description of the night, it might've been closer to the Rolling Stones at Altamont, if not as tragic.

As Gonsalves continued to wail away, the energy in the audience began to build. "A platinum-blonde girl in a black dress began dancing in one of the boxes (the last place you'd expect that in Newport!) and," writes Avakian, "a moment later somebody else started in another part of the audience." (There's a photo of the blonde on the back of the album and although she was anonymous at the time of the album's release, she was eventually identified as Elaine Anderson. You can read more about her and her recollections of that night here.)

Those dancers, the energy of Gonsalves's long solo, the driving rhythm of Ellington's band, and, no doubt, the lateness of the hour all combined to bring much of the crowd to its feet. They filled the aisles and pushed closer to the stage, at points leading police and festival security to consider shutting the show down. But Ellington, perhaps sensing the magnitude of the moment, would have none of it. The record ends after "Diminuendo and Crescendo," but the band played on into the night. And Ellington played on for another twenty years, thanks to this performance. 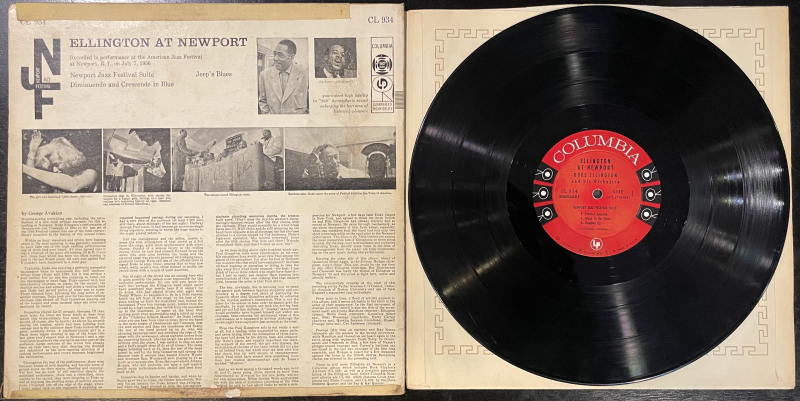 Side 1
Festival Junction
Blues to Be There
Newport Up

Side 2
Jeep's Blues
Diminuendo and Crescendo in Blue 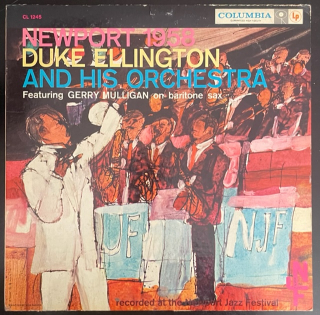 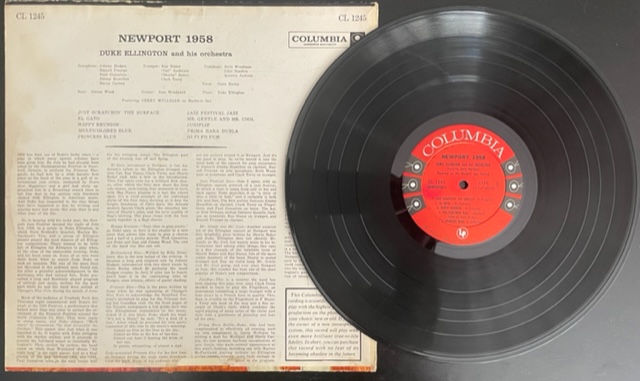