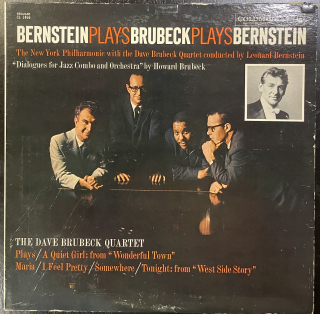 There are a lot of reasons why I like this record. First of all, it's the Dave Brubeck Quartet, one of the more well known groups in jazz history, one of the most important groups in the Cool Jazz movement, and possibly the single most famous jazz group to emerge from California. Two years before this record, Brubeck released Time Out, which features "Take Five," the best selling jazz single of all time.

Cool jazz is about what you'd expect -- a smoother, more relaxed response to the big band and bebop era that immediately preceded it. While bebop gets your fingers snapping and your toe tapping until you had just have to get out on the dance floor with your best girl, cool jazz is... cool. It's the soundtrack to an evening of best friends sitting around a table sharing stories, the clinking of glasses gently blending into the rhythm and melody of the music coming from the corner of the room.

It should be no surprise, then, that cool jazz led naturally into West Coast jazz, which gave birth to Dave Brubeck. The quartet's work is instantly recognizable, thanks mainly to the signature style of saxophonist Paul Desmond, who spends so much time playing in the upper register of his alto that the listener can be excused for mistaking it for a soprano. There is no other band that sounds like this one.

On this particular record, you get more than just Brubeck and his quartet. I've heard of Leonard Bernstein, but I only know two things about him: first, he was an American composer and conductor; second, I've screamed his name countless times when it comes up in the third verse of R.E.M.'s "It's the End of the World as We Know It (and I Feel Fine)." And if I'm being honest, I probably knew nothing about the the former when I first came across the R.E.M. song during my freshman year of college.

One the first side of the album, Bernstein conducts his New York Philharmonic Orchestra along with the Dave Brubeck Quartet as they play four pieces written by Brubeck's brother, Howard Brubeck. As we've seen in some of the other crossover records I've written about here, the orchestra stays true to the written score, while the quartet has the freedom to improvise and explore the themes that Brubeck's brother lays out for them.

The relationship is reversed on side two, with the quartet on their own playing four pieces from Bernstein's most well-known work, West Side Story, and one from Wonderful Town. The recognizable melodies drift in and out occasionally, reminding the listener of the source material, but the improvisation makes this is a work worthy of standing alongside Bernstein's original.

Is it cool? Without a doubt. 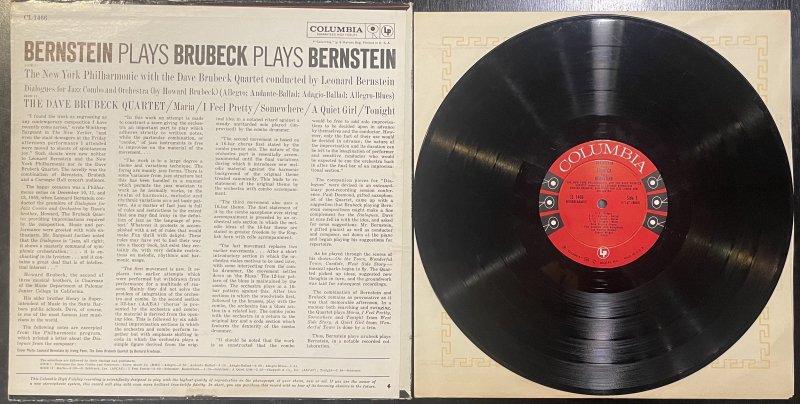 Side 2
Maria
I Feel Pretty
Somewhere
A Quiet Girl
Tonight 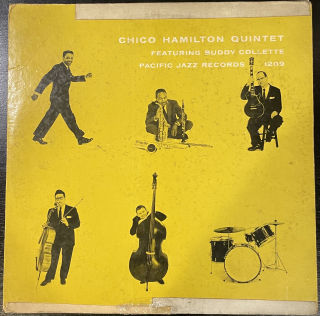 The Chico Hamilton Quintet is different, and it's immediately clear why this was one of my father's favorites. Hamilton was born and raised in Los Angeles, and he became one of the pioneers of a more relaxed style sometimes referred to as cool jazz, or even West Coast jazz.

I'm guessing there wasn't an East Coast-West Coast rivalry like Biggie and Pac, but things are different out here, even now. Back then? California might well have been an island floating in the Pacific Ocean.

Several years ago I had the opportunity to interview sportswriter Arnold Hano who had been born and raised in the Bronx before eventually moving out west to California, where he continued writing in the 1950s and '60s. (Here's the full interview: Part I/Part II.)We talked about how the West was viewed back then.

Hano:  When I was back in New York I did whatever was around there. But when I was on the west coast, you know, that’s an insular attitude. I was sent from Laguna Beach to Seattle to cover a basketball scandal at Seattle University!

Hano:  “Oh, Hano’s out there. He’s on the west coast, he can do that.” They would never send anybody from New York to Cleveland, but this is a greater distance, much greater distance. So yeah, you’re right. It was geographic. It was wonderful.

I can only imagine that the geographic isolation of the time allowed for, or at least contributed to, the creation of a sound that was dramatically different from the big band and bepop styles percolating on the East Coast. What this record preserves is a form of jazz that sometimes includes elements of classical music, combining my father's two loves. (Had Sinatra showed up to sing a few bars, we'd have had the trifecta.)

The opening notes of the record come from Fred Katz's cello, bowed not plucked, instantly establishing the classical feel. The rest of that first side, recorded in a Hollywood studio with Hamilton on the drums behind the rest of the quintet, certainly puts the cool in cool jazz, but I prefer side two. Not only is the style closer to the traditional jazz that I prefer, it was recorded live. In between tracks we hear polite applause from a small crowd, and during the songs, most noticeably during Carson Smith's bass solo on "Spectacular," we can hear the band members cackling with delight. The joy is palpable.

But here's the most interesting part. The live tracks were recorded at a nightclub called Harry Rubin's Strollers in Long Beach, California, just a short drive from my house. Some quick research gave me an address, but I wasn't surprised to find that there were no signs of a jazz club when I arrived on the scene. That stretch of the street has long since been closed to cars and renamed "Promenade" as part of the city's downtown revitalization project. As near as I can tell, the spot where the club must've stood is now occupied by the Renaissance Hotel.

It would've been nice to be able to walk into a darkened night club and imagine a scene from sixty-seven years ago, but instead I stood blinking in the California sun as bikers sped past and young couples pushed babies in strollers. It didn't matter. The connection was still there. On August 4, 1955, the Chico Hamilton Quintet recorded a few tracks in a long forgotten club in California. Not long after that my father bought the resulting record in Detroit and, judging by the wear and tear on the album jacket, came to love it. On a November afternoon in 2022, I brought the record back to where it had started. The circle was closed. 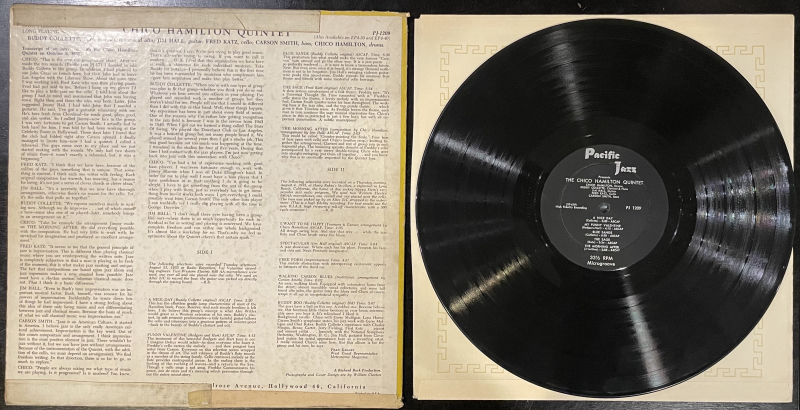