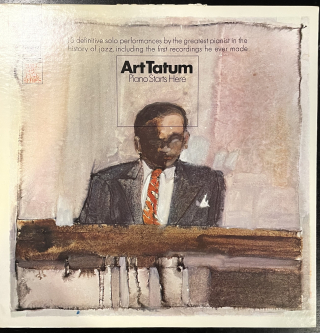 I had heard of Art Tatum, and I knew he was a jazz musician, but I'm sad to admit that I knew nothing more than that. I didn't even know what instrument he played until I picked this record from my father's collection. As it turns out, Mr. Tatum was a piano player, and by many accounts, the greatest jazz pianist in history.

This record, released in 1968, is a compilation of sorts. It isn't a greatest hits collection, but more of a retrospective. Side one opens with the first four songs Tatum recorded, back in 1933, and the rest of the tracks were recorded live at the Shrine Auditorium in Los Angeles in May of 1949. If he were posting on Instagram, he'd have tagged this album with "How it started, how it's going."

I took piano lessons for a time when I was in the sixth or seventh grade, but it was a failed venture. The problem, I think, was one of interior design. The piano was situated in the living room opposite of wide windows that looked out into the front yard. The player needed only to look over his shoulder to see his friends playing football in the street, and none of the sheet music I had could hold my interest as I sat at the bench. Like so many failed musicians, I didn't practice enough. Since I didn't practice enough, I wasn't very good, and since I wasn't very good, the piano wasn't very fun.

And it's a shame. Sure, the football games were fun, but I'd give anything to be able to sit down at a piano now and play a song. No instrument is easier to produce music on than a piano, but actually playing is something completely different. And Tatum does more than just play; it is as if he and the piano are one.

None of these tracks feature any accompaniment, but the tunes are so rich and so layered, that it often appears to be more than one musician playing. There's a story about Rolling Stones guitarist Keith Richards hearing a recording of the legendary bluesman Robert Johnson for the first time and refusing to believe there was only one guitarist playing. And so it was with those listening to Tatum. Even the greats who followed him -- Duke Ellington, Oscar Peterson -- understood that Tatum was on another level. (Take a look at this great conversation between Peterson and Count Basie discussing Tatum; they both speak of how intimidated they were by his greatness.)

As I listen to this record, drawing on perhaps eighteen months of piano playing experience four decades ago, I'm no less amazed than the experts. On some of the tracks the notes come flying so fast that it's hard to imagine human hands and fingers playing so precisely. On others, like the Gershwin standard "Someone to Watch Over Me," Tatum reminds us that he can be smooth and majestic, with long lyrical improvisations punctuating each of the recognizable phrases. It's a joy to listen to, and I can't believe it took me fifty-three years to discover his genius. Side 1
Tea for Two
St. Louis Blues
Tiger Rag
Sophisticated Lady
How High the Moon
Humoresque
Someone to Watch Over Me