For the second week in a row I'm writing about a live performance recorded at a jazz festival. Last week it was Duke Ellington at Newport, and this week it's Woody Herman at Monterey. The Newport and Monterey Jazz Festivals are unquestionably the biggest and most storied music festivals in America, so it's no surprise that so many of the greats have released recordings of their performances at one event or the other, and also no surprise that so many of those recordings are in my father's collection.

There's essentially zero chance that I'll ever make it to Newport, Rhode Island, and even though it's possible that I could head up the coast one summer to Monterey, the event I'd truly love to check out is the Detroit Jazz Festival, held annually on Labor Day Weekend. I've even got a cousin who sometimes performs there, so there's really no excuse not to make the trip. Someday.

But back to Woody and his band. Herman had taken to referring to his orchestra as a "herd" rather than a band, due in part to the fluidity of such groups. For this festival the herd included many of its usual members, but they also added a few guests from the nearby San Francisco Symphony. According to Ralph J. Gleason's liner notes, Herman remarked, "I wish I could take this band on the road!"

The result is some of the most listenable jazz you could ever find. It's not bland background music -- there's plenty of substance here -- but it isn't challenging. That's hardly a criticism.

We choose our music with a purpose in mind, creating a soundtrack to fit the moment. In my early twenties, when I was regularly making the six hour drive between L.A. and the Bay Area, for example, I had a playlist of CDs designed to keep the energy up during an otherwise monotonous trek. Some genres work well as the background for a study session, while something else might fit for an evening with friends.

There are even differences within genres. Charles Mingus demands your attention; Woody Herman says, "Don't mind us. We'll just be over here having fun if you want to listen." And it's the fun that shines through in this live recording. As one solo is passed to another, all the expected instruments have their moments -- a trumpet here, a saxophone there. But there's also Woody's clarinet as well as Vic Feldman's vibraharp, a warmer relative of the xylophone. Because it's a live performance -- and not just remixed versions of what was played that afternoon and evening in Monterey -- we can often hear the band members shouting encouragement to one another. (Gleason also writes that we can even hear a plane buzzing the crowd at various points, but I can't quite make that out.)

Gleason closes his notes by explaining that "Monterey was a gas for musicians and fans alike." We spend the time and money to go and see our favorite bands in concert precisely because "it's a gas." Cuing up the music and singing along at home to our favorite tracks is one thing, but being part of a crowd waiting for something unexpected to happen is something completely different.

Sometimes the venue matters. My wife and I went to see one of her favorite bands, the Shins, in a small club several years ago. There might've been five hundred people there, and the setting was so intimate that we could hear conversations between the bandmates between songs and comments from some of the superfans who predicted upcoming numbers based on which guitar the lead singer grabbed before heading back to the mic. I remember seeing the English Beat with a friend in an even smaller venue on the Sunset Strip; the crowd was so small that frontman Dave Wakeling opened the stage for any of the women, soccer moms all, to come up and dance as he played "Tenderness."

But somehow that joy of the performance isn't lost when the venue gets larger, it only changes. There's nothing like the collective explosion as an arena crowd hears the opening chords of a favorite song or sings along with the chorus. I saw U2 at the Rose Bowl several years ago, and even though our seats were roughly 200 yards from the stage, there was still a connection as one hundred thousand of us shared our voices with Bono as we sang the songs we'd been singing alone in our cars for the past twenty-five years. It was magic.

There might not have been any dancing on the stage on October 3, 1959, in Monterey, but there's no doubt the crowd that afternoon and evening arrived with the same expectations of concert and festival goers anywhere. Perhaps that's why we see only Woody Herman's silhouette on an album cover that's dominated by the crowd, row upon row of fans that say something significant about the era. Many of the men are wearing dress shirts and ties, and a few are even in suit jackets. There are hats everywhere with a few programs serving as makeshift visors, and those who aren't wearing sunglasses are squinting into the sun. If it were Woodstock or Lollapalooza or Coachella there'd likely be a lot more skin showing, but on some level a festival is still a festival.

The panorama of the crowd does bring up another issue that I've written about before. There might be two hundred faces in the photo, but only four of them appear to be Black. Granted, this was Monterey, California, and a picture like this taken in Chicago or New York or Detroit might've looked a bit different, but this was still 1959, a time when jazz musicians, both Black and white, were playing for predominantly white audiences like this one. So maybe this was more like Coachella than we might think. 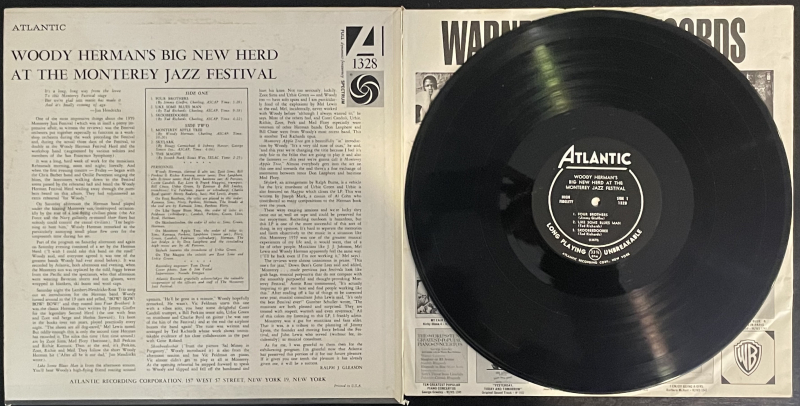