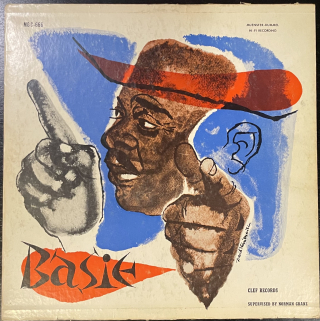 This is the third time that Count Basie has shown up here, a sure sign that he was one of my father's favorites. On this record -- another one that's well-worn and well-loved, with scratches and all -- Basie is again fronting his band as they run through ten tracks, each a stage for one of the members to roam free for a bit.

The result is an album that could be played almost anywhere. From Norman Granz's liner notes:

In the past we've labelled Count Basie's albums either as "Dance Session" or "Jazz," but actually Basie's music goes either way depending on your inclination at the time. You can dance and listen, or you can sit and listen; it's the same either way. It, therefore, seemed far simpler to merely say "BASIE" and let it go at that. The chances are you'll listen for a long time to Basie.

For me, it's a sit and listen kind of record, something that could be playing in the background while making dinner or washing dishes. Basie's band consists of the Count himself on piano along with five saxophones, a few trombones, and a percussion session. Granz is right when he writes about the difficult of classifying this album, and that's because it changes from one song to the next. One track will be smooth and reserved, perhaps to feature Basie's piano playing, the next will be upbeat, to allow two saxophonists to take the spotlight, and finally will be a song featuring call and response between a trumpet and a trombone.

It's nice, and it's comfortable, and maybe that's why it doesn't really grab me. One thing that does grab me is the cover, which features more artwork from David Stone Martin. It won't be the last time he shows up here, so stay tuned. 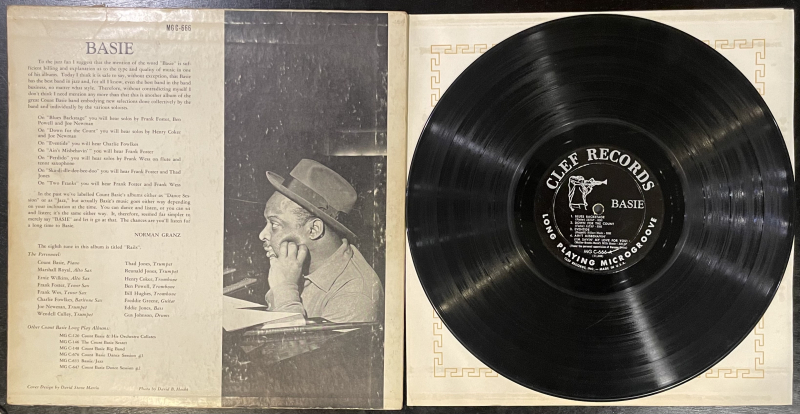 Side 1
Blues Backstage
Down for the Count
Eventide
Ain't Misbehavin'