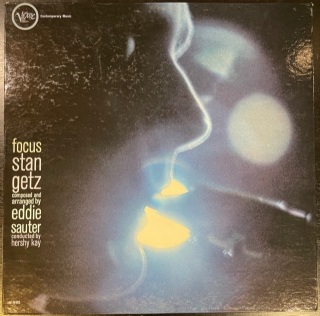 I hadn't heard this record before this morning, and even though I'm only on my second listen as I write this, I have to admit that it's already one of my favorite albums for a handful of reasons.

First, it's absolutely beautiful. Stan Getz's tenor saxophone is melodic and sonorous as it pours into every nook and cranny of Eddie Sauter's composition, layering atop the delicate strings of the arrangement and lingering in empty spaces before quietly fading away. It's soothing and hypnotic at times, like on "I Remember When," the opening track on side two, but there's also the pulsating frenzy of "I'm Late, I'm Late" on side one. There's a song here for every mood.

It only took me a few minutes to realize why this was one of my father's favorites. His jazz collection leans heavily towards the big band era, but that's not this. This isn't one horn player fronting a band, this is Stan Getz front and center, with each composition highlighting his tenor sax and giving him room to dance. There are any number of records like that, but what makes this one unique, what must've appealed so much to my father, was the merging of his two musical loves, classical music and jazz. As Getz explained while describing the songs Eddie Sauter wrote, "...more than anything, they show quite clearly that the legitimacy of the past 300 years and the soul of our modern times can be put together and be beautiful."* Indeed.

There are more than a hundred classical records in my father's collection and notebooks filled with musings on the masters. He no doubt appreciated what Getz and Sauter were doing, blending his two loves into something new.

"What I wanted to do," explained Sauter, "was write like a string quartet with space to move things." Incredibly, all Sauter did was write for the strings; he left Getz on his own with the idea that he'd simply improvise over the written material. Obviously it's Getz's improvisation that elevates this record from a good idea to something closer to genius.

The art form of jazz is built on improvisation, which often means one musician is stepping forward to explore some musical ideas for a minute before retreating into the fold. You can see that at any high school jazz concert, but when elite musicians come together the improvisation becomes more of a communal call and response as a riff is floated by one, echoed by another, punctuated by the drummer, then reimagined by the originator. In many ways it feels like music in its highest form.

Years ago my wife and I celebrated our wedding anniversary at a Harry Connick, Jr., concert at the Hollywood Bowl. He was playing with a large band, and while the music was amazing, what stayed with me as we walked away was the absolute joy that had flowed from the stage that night. Connick is a showman, and he was obviously there to entertain us, but there were moments when the audience didn't matter. He and his band were all in their element, discovering new nuances in tunes they had played hundreds of times, and when a song would end to thunderous applause, the band members didn't look to us. Instead they first looked to each other, nodding and smiling, a bass player acknowledging something the drummer had done, the piano player appreciating a tangent the saxophonist had just explored. Only after they had celebrated each other would they turn to us and accept our applause. We were clearly secondary, just lucky to be there.

It's this ephemeral nature of jazz and improvisation that has always proved difficult to capture on vinyl. If you watch a band over the course of a few nights, the same song might go in different directions from one show to the next, and the same thing can happen in a studio. Nothing was written here for Getz, so this album is just a record of the musical journeys he took during the three sessions it took to complete the work. In fact, the opening track of the album is significantly longer than any of the others precisely because of the vagaries of improvisation. "The only two takes were judged to be so fresh and so different that, rather than scrap one, they were tacked together to form a single take."

The choice to combine those two takes echoes the larger choice to combine these two genres. I'm sure that some of the records I write about here will go back into their sleeves and rarely if ever see the light of day again. My father was right about this one, though. It'll stay in the rotation.

* All quoted material comes from the text of the liner notes written by Dom Cerulli.