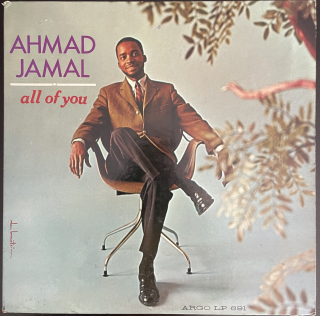 Record: All of You
Artist: Ahmad Jamal
Released: Argo Records, 1962

I had never heard of Ahmad Jamal before flipping through these records a few months ago as I started thinking about this project, and this record stood out, not just because the artist was unfamiliar.

Look at young Mr. Jamal gracing the cover of the album, sitting confidently in a mid-century modern chair that my wife would die for, nattily dressed with a tie I wouldn't mind wearing to work. There's something striking, not just about his pose, but the entire composition of the photo. Jamal couldn't be more self-assured, but he seems to be holding something back. His eyes don't quite meet ours, and the blurred foliage in the foreground seems to be keeping us at a bit of a distance. "Give me all of you," he seems to be saying, "but you can only have some of me." Some is enough.

As with a lot of these albums, I had never heard All of You before dropping the needle on the record this afternoon, so I had no idea what to expect. It took me about three or four bars before I fell in love.

This isn't usually the case for me. Typically I have to immerse myself in a new album, and plenty of my favorites grew on my over time. It's hard for me to imagine now, but the first time I listened to the Cure's Kiss Me, Kiss Me, Kiss Me it felt a little abrasive, as did Nirvana's Nevermind. Not until I had studied the lyrics of Springsteen's Nebraska did I fully appreciate its genius, and it took several listens to wrap my head around Coltrane's A Love Supreme. Sometimes listening has to be intentional, not casual.

But once in a while a record will meet you right where you are, whether it's at a particular time in your life or a moment in time. For me, some of these were Led Zeppelin's first album, the Red Hot Chili Peppers' Blood Sugar Sex Magik, and even a self-titled debut album from an obscure Scottish band, Glasvegas.

There's no explaining why, but it was like that with All of You. It turns out Jamal is only the headliner, the pianist in the Ahmad Jamal Trio, and the opening track, "Time on My Hands," highlights his skills on the keyboard in the most beautiful way. I was only a minute or two in before I was reminded of a similar jazz pianist I had discovered on my own when I was in college. Marcus Roberts burst on the jazz scene in 1989 with his debut album, The Truth Is Spoken Here, at the age of just 26. (Here's my favorite track from that album, a Duke Ellington cover, "Single Petal of a Rose.") He had already been playing with some of the greats at an even younger age. (When I first heard him he was playing with Wynton Marsalis.)

Roberts has always been known for his appreciation of traditional jazz and the greats who came before him. His third record, Alone with Three Giants, features his interpretations of Duke Ellington, Thelonious Monk, and Jelly Roll Morton, and he later recorded tributes to George Gershwin, Scott Joplin, and Nat "King" Cole. It shouldn't have been a surprise that I heard similarities between Jamal and Roberts, but I was still pleased (and admittedly proud) when a Google search for "Ahmad Jamal and Marcus Roberts" returned several articles. In 2009, for example, the Village Voice declared that Roberts "has more than a little Ahmad Jamal in him." So I wasn't the only one who heard it. It was validation for my ear.

I've just flipped the record again, listening to the second side for at least the third or fourth time, and I'm struck again by the emotional aspect of the quest I've been on. Certainly I enjoy listening to the music, whether it's familiar or new, and I love the unpredictable paths I wander as I learn about each record, thinking about things as surprising as mix tapes one week and cover art the next, a demolished department store last Sunday, and today a band from Scotland.

But all of that is diversionary. At its heart, this project will always be about my father. I pull him closer with each Sunday that passes, with each record I play. I learn something about who he was by listening to the music he treasured. Sadly, it's like catching smoke in your hands. It's temporary. Every wisp of truth brings along pangs of regret. I so wish that I could have had this conversation with him, that he and I could have listened first to All of You and followed it with something from Roberts. That we could have shared interpretations or argued about opinions. Or just sat together and listened. 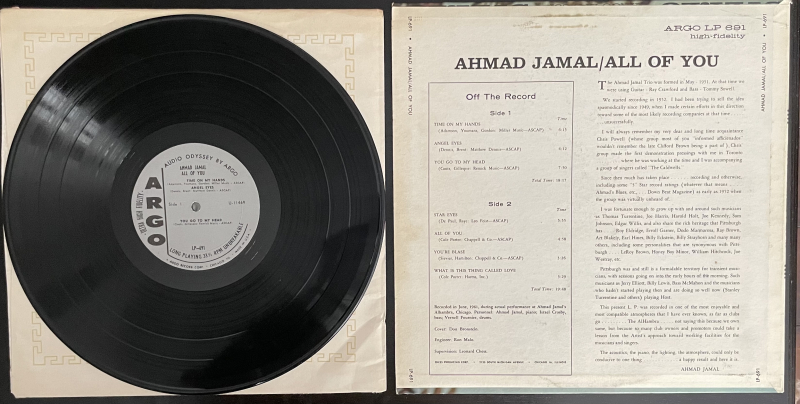